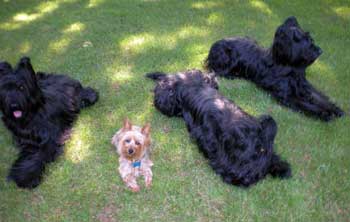 DOMINANCE in the Briard

The nature of some Briards is to be dominant, and unchecked dominance can lead to aggression. Dealing with dominance does not require tremendous force - it just requires consistency, time, and effort. The time to learn about dealing with dominance is before you get your Briard - not at 12 months, when they are "large and in charge".

There are different schools of thought on how to deal with dominance. Some trainers don’t believe it needs to be dealt with at all – sort of a “let’s all be happy together” approach.

It’s important to know what breeds a trainer has worked with before trying this approach. What might work great with a Beagle, Labrador Retriever or a Shitzu may not work at all with a Briard, Aussie, or Cattle Dog. Much less a Pit Bull!

With an adult dog already established as dominant, it is important to work with someone very experienced to avoid getting bitten.

One approach used is to establish physical dominance. Alpha rolls, beard shaking, physically lifting a dog off the ground all have a place in this approach.

Other trainers prefer to establish dominance by training submissive behaviors, such as laying down, with a praise and reward method. They use obedience training as the foundation for establishing and maintaining dominance. This undoubtedly works with many Briards.

Which method is "right" depends on the individual dog and owner.

Crate training is essential when working with any approach. The ability to give a dog a controlled time out is only one of the hundred good reasons to crate train any puppy or dog. 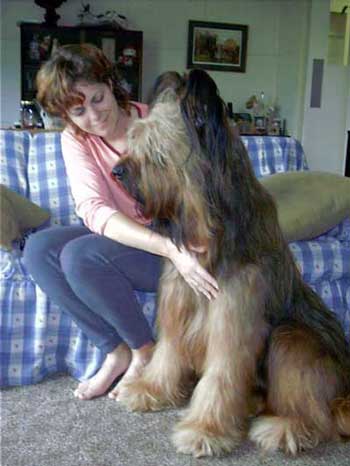 Who's the leader of the pack?

Dogs are pack animals – nothing is going to change that. In a pack, there is an established dominant / submissive ranking. There is also a constant looking to 'move up the ladder' in a pack, to become the alpha dog (or bitch). You can see this even in a litter of three week old puppies, with eyes barely open, staggering around the whelping box, and play fighting. An 8 week old puppy has to figure out his new “pack”, in his new home. Some puppies decide they want to be alpha, and start looking to move on up the ladder. If you recognize this at the start, it is much easier to control.

Puppies need to respect their humans, and acknowledge their leadership. It takes time, consistency, and a fair degree of firmness to achieve this with a dominant, strong Briard, even a puppy. If the breeder is a good one, from a young age the pup has been taught to tolerate handling, including being cradled upside down, laying on it's side, and laying on it's back. All of these are submissive postures. A breeder will often use the puppies response to these positions to determine how dominant or submissive the puppy is. A formal temperament test at 7 weeks can help confirm the breeder’s assessment of the puppies in a litter. 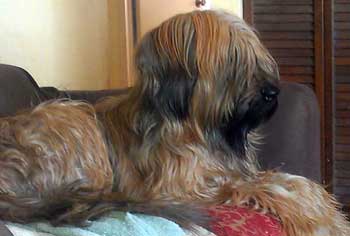 Nip Dominance in the Bud

One test for dominance - cradle a puppy on it’s back in your arms like a baby. Does it struggle? If it does, do you release it, or just hold on until it relaxes?  If a puppy is released when it struggles, it has just been taught that it can get it's own way. Instead, the pup is held, without harsh gripping, until it relaxes and accepts that it will only be let down at the will of the owner. This usually can be achieved in a few minutes. It is given the reward of praise and petting, let down, and everyone profits. The pup is not harmed in any way, and the owner does not even have to raise his voice. The point is made by consistency, not by anger.

Other handling exercises include standing with the puppy between your legs, and lifting the front feet off of the ground by cradling the chest; kneeling next to the standing puppy and laying an arm across its shoulders; and making the puppy wait until you go through doors first. These are exercises that can be done with any new puppy, to establish gently but firmly from the very beginning who is dominant. Most puppies will welcome the attention, and never dispute the issue.

Remember that learning the word "NO" will help your Briard to keep track of who's in charge!

It is very important to reward appropriate behaviors. Some trainers prefer to do this with food. Others will use a strongly positive tone and words. When a dog sits when commanded, rolls over for a tummy rub, averts his eyes from yours, licks your hand - don't take this for granted! Reward the dog. Steps that can be taken with any age dog include not letting the dog up on furniture or the bed (or requiring that they wait for permission), always going through doors before the dog, always eating before you feed the dog, and making the dog get up and move if it is in the way, rather than stepping over or around the dog.

Use the Queen Victoria mindset - if you were the Queen, and the dog was a subject, would you let the dog barge through a door before you, eat before you, sleep with you, or get hair on your throne? Keeping that attitude can carry you through many situations!