Briards are a Healthy Breed

Overall, the Briard is a healthy breed. Many of the problems seen are shared by all dogs, especially those of similar size. Here is a brief overview of some health issues Briards can face. 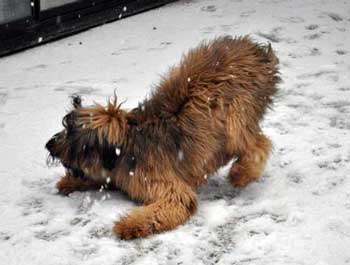 Every Briard owner should read this page regarding bloat. It may save your dog's life.

Bloat (or gastric torsion) affects primarily large, deep chested breeds, such as the Bloodhound and Great Dane. The Briard can also be affected. For whatever reason, when a dog is bloating, gas collects in the stomach, and cannot escape. If the stomach twists with the gas buildup (torsions), the gas is trapped, and stomach / intestinal tissue starts to die from a lack of blood circulation. Surgery is required immediately if the dog is to have any chance to live.

The causes of bloat are unknown, but it is felt that stress, hormones, a genetic predisposition, even exercise can play a role. Or, there can be no disernible reason at all. A good explanation of bloat can be found at Foster and Smith, Bloat is painful, life-threatening, and can strike any dog, even those with no history of bloat in the pedigree. It often strikes relatively young dogs, at four to five years of age. It is difficult to determine the actual incidence of bloat, as many breeders do not admit it has happened to their dogs. Dogs that have bloated often have their stomachs "tacked" (attached to the wall of the stomach cavity) , which prevents a recurrence of the torsion. The dog can still bloat, but the life threatening torsion is prevented. Dogs which have bloated and recovered can live normal lives if tacked. Some breeders with a high incidence of bloat in their lines tack all their dogs, before they have a chance to bloat. 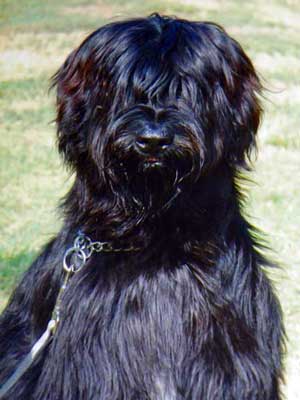 In every breed of dog, cancer is on the rise. Is it due to an increased life span, more chemicals in the diet, overvaccination - there is no clear answer. Briards are no more prone to cancer than any other breed. There is no specific cancer that is more prevalent than any other. Dog owners lose too many dogs to cancer!

Dogs and Cancer: Get the Facts

Types of Cancer in Dogs 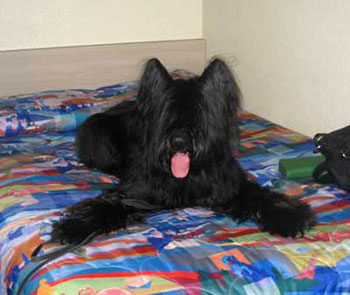 These are present in many breeds of dogs, and have shown up in Briards, both in Europe and in the US. Ectopic Ureters cause urinary incontinence. In the European Briard community, many dogs are now being tested for this condition prior to breeding. The test is currently not readily available in the US. Dogs with EU have been called "leaky puppies", since the condition shows up at a young age, and affected dogs cannot control their bladder.

The mode of inheritance is unknown. It is also unknown if there is any genetic link in Briards. 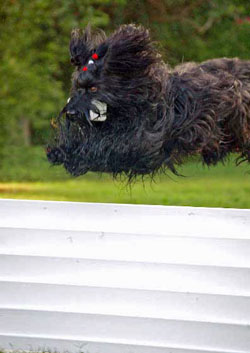 This is not a life threatening condition, but a dog with hip dysplasia can have a lower quality of life, especially as they age. It can cause degenerative changes in the hips, leading to arthritis and chronic pain. It can also have virtually NO visible effect, even on a dog with severe dysplasia. Much depends on the degree and type of dysplasia, and the individual dog. It is a disease with both genetic and environmental factors, and responsible breeders have hips checked and evaluated by the Orthopedic Foundation for Animals (OFA), and / or Penn-Hipp before breeding.

Two dogs with OFA Excellent hips can produce dysplastic puppies. Dogs with severe dysplasia can produce puppies with normal hips.  The purpose of screening dogs is to increase the chances of producing a greater number of normal pups. It is not a guarantee that a puppy will be free of hip dysplasia. Over time, the regular screening of hips has reduced the incidence of hip dysplasia. Reputable breeders do not breed dysplastic dogs. Every breeder wishes there was a genetic test for hip dysplasia! 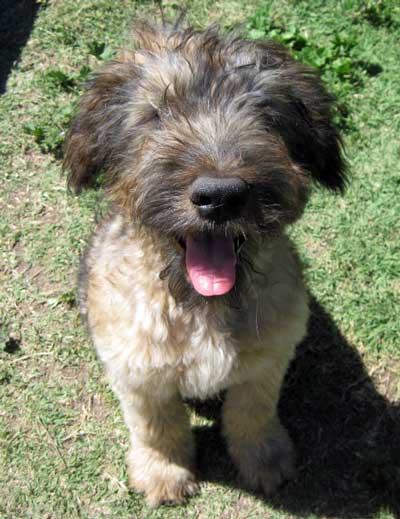 Congenital - present at birth. Stationary - does not progress over the life of the dog. Night blindness - affects vision in poor light.

Never a common condition, CSNB AFFECTED dogs can have varying degrees of night blindness. A night blind dog can have problems ranging from a slight difficulty in moving around in poor light, to almost a total loss of vision in dim light. A genetic test for the recessive gene which causes CSNB is now available for breeders to use, so the incidence in the Briard population should decrease.

Dogs that are CARRIERS of CSNB are not affected in any way. Carriers can now be bred safely, as long as it is not to another carrier. With genetic testing available, high quality Briards that carry the CSNB gene no longer have to be avoided as breeding animals, but many breeders will not breed carriers, to avoid the expense and trouble of the genetic testing, and to lessen the incidence of CSNB. In England, breeding of carriers was banned after 2014. Read more about CSNB and the test for it. As an item of interest, Briards were involved in developing gene replacement therapy for humans with a similar genetic defect. A Briard involved in the research actually had normal sight restored!

Note: at Lebec, I produced a litter of CSNB affected puppies as a result of an accidental breeding in 2008. From personal experience, I can state that of the 4 affected pups in the litter, only one had a quality of life issue, as he was strongly affected. There were no temperament or behavior issues in three of the affected pups. Many breeders who have not personally seen affected pups continue to maintain that all will have poor temperaments and be deeply affected, but this is not the case. I was very public about my litter, but in talking to two other breeders who had produced affected pups but chose not to come forward, and to several owners of affected dogs, I found that poor temperaments were not an issue. Obviously, carrier / carrier breedings need to be avoided, but the rumors regarding these pups need to be debunked. 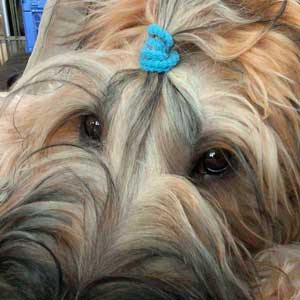 There are several eye conditions which may appear in Briards on an occasional basis. Minor Cataracts, Corneal Dystrophy, and Retinal Folds are among these. Nutritional cataracts may also be present in bottle raised puppies. They have very little effect on the quality of life of the Briard, but reputable breeders will do annual OFA eye exams (these used to be known as CERF exams) to check the condition of the eyes. In Europe, many breeders don't do routine screenings for eye problems.

Other conditions can arise on an occasional basis. Hypothyroidism, auto-immune diseases, exocrine pancreatic insufficiency, kidney disease, etc all occur, but not at significant rates. 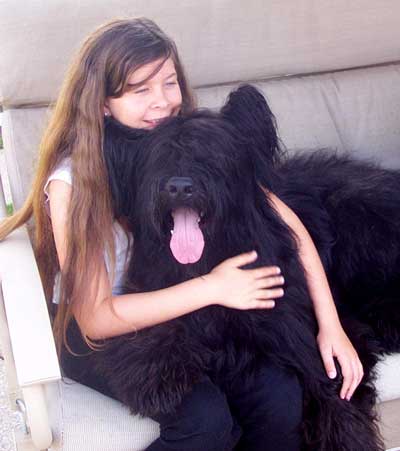 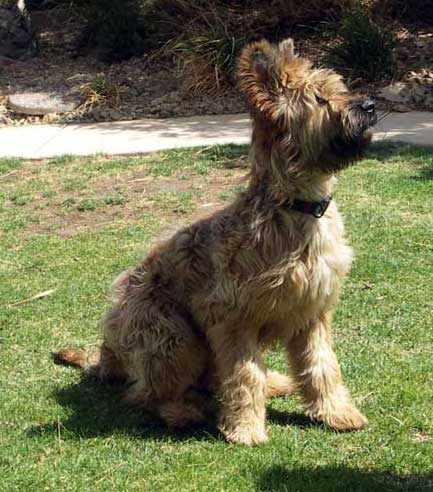 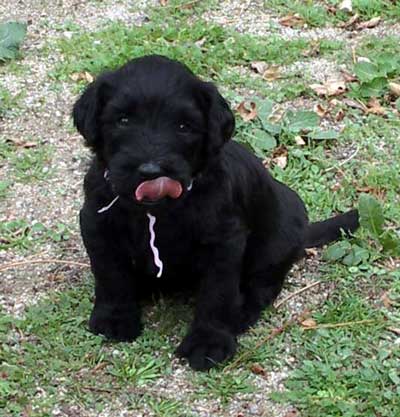